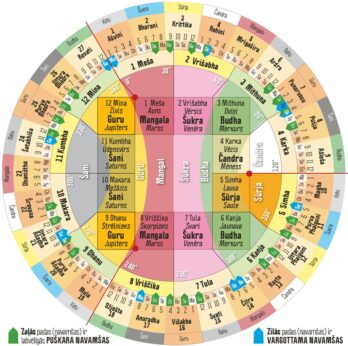 There are 28 constellations known as Nakshatram or Nakshatra Pada according Hindu system of vedic astrology. Though total number is given as 28 stars, only 27 nakshatra or constellations are now in use. Each star is divided into 4 quarters. The Rasi or Sign is assigned with 30 degrees each and totaling 12 houses to 360 degrees.

Thus each sign is assigned with two full stars and a quarter, each quarter having 3 degree 20 minutes; thus 9 quarters equals to 30 degrees called one sign or house. From Aries to Pieces, twelve houses are allocated with 9 pada or 2 and a quarter star for each house. (27 stars’ x 4 quarters x 3 degrees & 20 minutes = 360 degrees OR 27nakshatram x 4 padam ^ 9 quarter each = 12 houses or signs).

To calculate in which pada or quarter a birth has taken place, one has to simply divide the Nakshatram or stars total hours and find the birth time in which quarter it falls. IN all the Indian Almanacs known as Panchangam, published in different languages from every state, you can find the total reminder nakshatra time of each day at the beginning which indicate the reminder time of a nakshatra after sunrise.

Generally, all stars are having more than sixty ghati or 24 + hours in length. Thus, in a day two nakshatra falling is quite usual. It might be a reminder part of earlier nakshatra at the time of sun rise and later next nakshatra to rule the rest of day and continue till next day.

One has to take into account of their local sun rise time and adjust the timing given in the Almanac accordingly to the desired location. For example, if the Sun rise time is 6 am for Chennai, and the Almanac or Panchangam might give the nakshatra of a particular day after sun rise as 3 hours and 30 minutes.  i.e. this timing is a reminder part of earlier day and the nakshatra is ruling till 9.30 am at Chennai.

But the same may vary to Mumbai because of the sun rise time differs. So, if for same particular day Sun rise time is 6.45 am in Mumbai, then the nakshatra ruling time in Mumbai would be till 10.15 am.

You can calculate so on and so forth for any desired location; for overseas residents, they need convert these timings according to their local timing which might be plus or minus from GMT. There are numerous websites giving free time conversions for every time zone. So it would not be a very difficult to find out the exact time variations from the specific almanac or Panchangam.

Now, for easy calculations, I list below each nakshatra and total Hours of its duration; because of each star has different duration of ruling time, not all the days you will get one nakshatra ruling. There can be one on some days and partially continuing on the next day and on the same day next nakshatra ruling later.

For the sake of easy calculations, I give below each nakshatra and its duration in hours together with each padam and in which sign in falls. So that one can easily calculate the nakshatra pada and which sign or rasi it falls into.

The following chart categorizes into segments of one Star with four quarter, then to nine divisions of two and a quarter stars, that is taken into one Rasi – sign of 30 degrees.

In those Vedic Era, a constellation – Star named Abhijit was existing then. Abhijit nakshatra, an auspicious one was placed in-between Uthrashada and Shravan (in-between Uthiradam and Thiruvonam). And the Nakshatra Lord is said to be Brahma.

To achieve success in every act, persons used to start their activities on this day. During the Mahabharata time, Lord Sri Krishna came to know, that Dhuriyodhana is planning to start the War with PanchaPandavas on this auspicious day, combining with Amavasya & Abhijit Nakshatra!

On getting Dhuriyodhana’s plans and knowing his intentions, Abhijit Nakshatra was plucked from the stellar system, by the Lord Sri Krishna, to avoid misuse of this auspicious nakshatram during Kali Yuga.

For the sake of easy recognition, I have given the beginning name alphabet for each star & its quarter. I hope this is very useful and helpful for the persons who search for naming their child. Whether male or female child, irrespective of gender, the beginning name letters are given as common.

This chart is prepared and published for the benefit of newly wed couples, and persons who would like to know the basics of star and its divisions. It is still advisable to follow the almanac (panchangam) to refer to the day to day positions of moon’s movement.