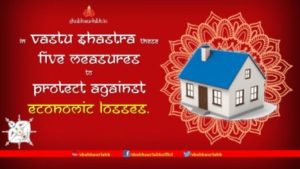 5 Measures to Protect against Economic Losses

1.The Direction of Keeping –  The money and the savings in which the treasury or cupboards are kept in the side of the south, keep it in such a way that its mouth is towards north direction. Even if there is a mouthpiece for the east direction, money increases but the north direction is considered to be the best.

2.Change Tap – Keeping water from tap water is considered a major cause of economic loss in Vastu Shastra, which many people ignore. According to Vaastu’s law, the flow of water from the tap is indicative of the expenditure of the money gradually. Therefore, the taps should be changed immediately after the malfunction.

3.Do Not Keep Junk at Home – Negative energy is transmitted in the house by placing broken pot and junk in the house. Broken beds and beds should not be kept in the house, it reduces economic benefits and increases the expenditure. Many people keep the junk under the roof or roof of the house, which is a hindrance in wealth growth.

4.Evacuation of Water – Many people do not take care of the direction in which direction their water is going out. According to Vaastu science, water extraction affects many things. In whose house the drainage of water is in the south or west direction, they have to face many other problems with financial problems. The clearance of water in north direction and east direction has been considered as auspicious.

5.Hang on the Wall Metal Goods Hold a metal piece – The left corner of the wall in front of the entrance of the room in the bedroom. According to Vastu Shastra, this place is the area of ​​fortune and property. If there are cracks in the wall in this direction, then they should be repaired. The cutting of this direction is also a cause of economic loss.