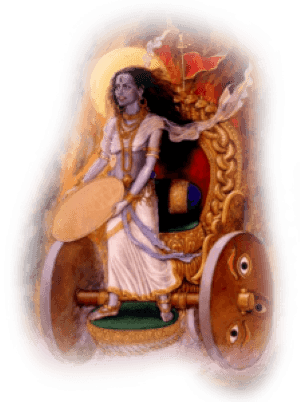 Goddess Dhumavati is the Seventh of the Dasa Mahavidya. Devi Dhumavati is an old widow and is associated with things considered inauspicious and unattractive. She is always hungry and thirsty who initiates quarrels.

In characteristics and nature, she is compared with Goddess Alakshmi, Goddess Jyeshta and Goddess Nirriti. All these three Goddesses are embodiment of negative qualities but at the same time worshipped at special timings of the year.

Dhumavati Origin – As per legend mentioned in Pranatoshini Tantra, once Devi Sati due to satiate her extreme hunger swallowed Lord Shiva. Later on the request of Lord Shiva itself, she disgorged Him. After this incident, Lord Shiva rejected Her and cursed Her to assume the form of a widow.

Dhumavati Iconography – Goddess Dhumavati is depicted as an old and ugly widow. She is thin, unhealthy with pale complexion. Unlike other Mahavidya(s), She is unadorned with jewellery. She wears old, dirty clothes and has disheveled hair.

Dhoomavati Mantra Sadhana – For doing dhoomavati sadhana you should face west side and light mustard oil lamp, first do pooja of dhumavati also do prayers and dhyan mantra and after that start reciting the mantra using black rudraksha rosary and minimum 5101 mantra jaap require for this ritual of dhumavati mantra and after that hawan in last with aarti for completion of ritual.

Dhumavathi (Dhoomavati) Temples are very very few in India. I mention them here.

Mangalore – It is the district headquarter city in Karnataka State. Dhoomavathi temple is here in urwa. This temple is just 5kms away from Mangalore Railway Station.

Paladukka – It is a small village in Kasaragod district of Kerala State. Sri Dhoomavati Daivastanam is here. This temple is 20kms from Kasaragod.

Udipi – It is the district headquarter in Karnataka State. Saavirala Dhumavati Daivastana is here in kapu. This temple is just beside the Udipi KSRTC Bus Stand and opposite of Alankar Cinema Theater.

Athikari Bettu – It is a small village in Dakshina Kannada District. Nadibettu Dhumavati Daivastana is here. this temple is just 1.5kms from Athikari bettu. This village is just 16kms frm Surathkal and 36kms from Mangalor.

Nadsal – It is a village panchayat in Dakshina Kannada District of Karnataka State. Pai Dhumavati Guddi (Temple) is here beside of Lakshmi Narayan Temple. This temple is just 10kms away from Athikari Bettu Dumavati Daivastana and 19kms from Surthkal.