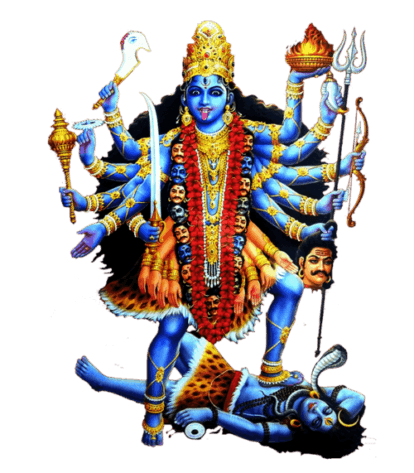 Worshipped – To fulfill all types of desire.

Goddess Kali is the First of the Dasa Mahavidya and the fiercest aspect of Goddess Durga. Kali is considered as the Goddess of time and change. She presides over the time before the creation of the universe. Kali is represented as the consort of Lord Shiva. Her abode is cremation grounds and her weapons are Kripana (Scimitar) and Trishul (Trident).

Kali Origin – As per Devi Mahatmya, Devi Kali was appeared out of Goddess Durga to defeat the demon Raktabija. Raktabija, which means blood-seed, was able to clone himself out of the dripped blood on the ground. When during battle, Raktabija became impossible to kill Goddess Kali appeared to swallow the blood of Raktabija before it dripped to the ground.

In some representations, one of the upper hands of Kali is shown in Varada Mudra and one of the lower hands holds a Trishul.

Kali Mantra Sadhana – First day is for doing the kali sadhana. For doing this sadhana you should seat on black cloth, face north side, do the proper kali worship and offer her favorite things of her and after that recite the kali mantra 1100 times minimum after that do hawan from same mantra also.

There are thousands of Kali Mata Temples in India. I mention here some of the important temples.

Kalighat – It is in the Kolkatta which is the capital city of West Bengal State. Kali Mata Temple is here. This temple is just 12kms away from Howrah Railway Station.

Dakshineswar – It is also in the Kolkatta city. Kali Temple is here on bank of Hugli river. This temple is just 12kms away from Howrah railway station.

Ujjain – It is the district head quarter city of Madhya Pradesh State. Harsiddi Mata (Ujjain Maha Kalikadevi) temple is here. It is just behind the Mahakaleswar Temple. Ghatkali temple is also here at outskirts of Ujjain city. This temple is just 4kms from Mahakaleswar temple.

Danre – It is a small village in Godda district of Jarkhand State. Bam Kali Temple is here. Danre is 60kms from Deoghar.

Bhuvaneswar – It is the capital city of Orissa State. Maa Raksha Kali Temple (Kali mandir) is here in ganga nagar. This temple is just 3.2kms from Bhubaneswar Railway Station and 4.5kms from Lingaraja temple.

Cuttack – It is the district headquarter in Orissa State. Kali mandir is here on the bank of Mahanadi river in Badambadi colony. This temple is just 4kms from Cuttack Railway Station. Cuttack is just 27kms away from Bhuvaneswar.

Chennai – It is the capital city of Tamilnad State. Kali temple is here in Kodambakkam. This temple is just 10kms away from Chennai central railway station.

Goregoan – It is the suburban of Mumbai. Kali Mandir is here in Bangurnagar. This temple is just 6.5kms from Andheri metro railway station and 34kms from Mumbai Central Railway station.

Rathnamangalam – It is a village near Chennai of  Tamilnadu State. Sri Chakra Kali Temple is here. This temple is 10kms away from Vandalur railway station and 40kms from Chennai.

Warangal – It is the district headquarter in Telangana State. Bhadrakali Temple is here and it is very famous one. This temple is just 4kms from Warangal railway staion, Warangal is 145kms from Hyderabad.

Some more Kali temples are there in India.