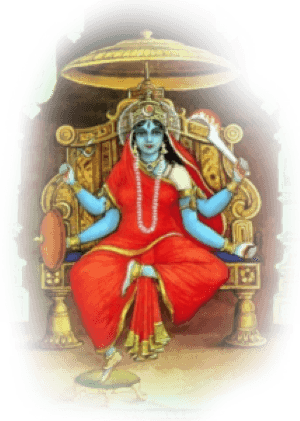 Although Goddess Matangi is compared with Goddess Saraswati, she is often associated with pollution and impurity. She is considered an embodiment of Ucchishta which means leftover food in hands and the mouth. Hence, she is also known as Ucchishta Chandalini and Ucchishta Matangini. She is described as an outcaste and offered left-over and partially eaten food i.e. Ucchishta to seek her blessings.

While eating, the deities dropped some of the food on the ground. A beautiful maiden arose from dropped food who asked for their left-overs. The four deities granted her their left-overs as Prasad.

Matangi Mantra Sadhana – For doing mahavidya matangi mantra sadhana you should face east direction and face the earth. First worship and offer her favorite things and after prayer, pooja worships start doing matangi mantra atleast 5100 mantra you should do for success.

Matangi Mata Temples also very few in India. I mention here some of them

Belgam – It is the district headquarter city of the Karnataka State. Matangi Mata Temple is here in Tilakwadi. This temple is just 1.4km from Belgam Railway Station. Belgam is 102kms from Hubli.

Madanapalle – It is a municipal town in Chittore district of Andhra Pradesh State. Mathanghi Temple is here in Nuthi Radhakrishnaiah Nagar. This temple is just beside the RTC Bustand of Madanapalle. Madanapalle is 113kms from Tirupati and 26kms from Punganur.

Jhabua – It is a district headquarter town in Madhya Pradesh State. Mathngi Darshn (Temple) is here near Krishi Vignan Kendra. This temple is 2.5kms from Jhabua Bus Stand. Jhabua is 150kms from indore on Dahod road, and 45kms from Dahod.