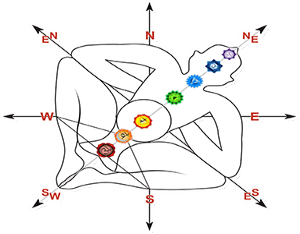 Nowadays,  when someone thinks of taking or making a new house, then he has a desire to make his house consistent with Vastu so that the happiness and prosperity in the house remains. Therefore, every person wants his house to be in the east or north direction according to Vastu.

After these two directions, the third choice of people is home to the main door in the west, but people in the south-direction house are afraid to settle. This is the reason that there is no client to get south-house and land quickly.

2. In comparison to the south, the east direction should be left more open than in the north and west.

3. Be aware of any type of underground tank such as fresh water tank, boring, well, etc., with only compound wall between north direction, north north, east and east direction. Make septic tanks in north or east direction only.

5. The floor should not be high in any part of the building. If you want to give a slight shield for cleaning, then you can shield the north, east direction or north-east angle. Similarly, let the shield of the open part of the plot be towards north, east direction and north angle, so that the water of the rain comes out through the northeast angle.

If the arrangement of drainage system can not be done in the north or east direction, then in such a situation, along with the compound wall, make a drain from the east side of the plot and take it out towards the eastern igneous side or make a drain from the north north and drain it out of the North West. Please give it. The construction of a south direction house can be built by following these rules of Vaastu, then such houses prove fortunate for the residents.