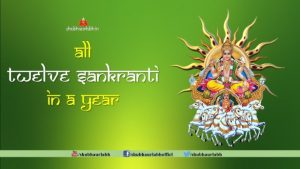 All Twelve Sankranti in a Year

In Hindu calendar, there are total 12 Sankranti in a year. All Twelve Sankranti can be divided into four categories.

Among all Sankranti, Makar Sankranti is the most significant one and it is observed throughout India. Sankranti days are considered good for charity activities and all auspicious ceremonies are avoided on the day of Sankranti(s)

Vedic Astrologer and Panchang Karta (कर्ता) are aware of this fact and don’t do any correction as precession has to be considered to mark the correct position of Stars.

According to above explanation, Hindus still celebrate Makara Sankranti on right day however the word Uttarayana has become misnomer with time and most Indians have accepted this fact by ignoring Winter Solstice and Summer Solstice for any religious activities.

Uttarayana in Hindu Puranas. Uttarayana is referred to as the day of new good healthy wealthy beginning.

According to Kauravas and Pandavas, in Mahabharata on this day Bheeshma Pitamaha, chose to leave for his heavenly abode. As per the boon granted to Devavrata (young Bheeshma), he could choose his time of death and he chose this day, when the sun starts on its course towards the northern hemisphere.