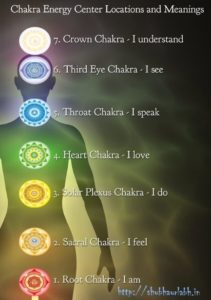 Chakra’s Are Energy Centers In The Human Body

Chakra is a Sanskrit word and it means “Wheel” or “Vortex” because that is what it looks like when we look at it. Chakras Are Energy Centers In The Human Body. Each Chakra is like a solid ball of energy interpenetrating the physical body, in the same way that a magnetic field can interpenetrate the physical body.

Chakras interact with the physical body through two major vehicles, the endocrine system and the nervous system. Each of the seven main Chakras discussed here are associated with one of the seven endocrine glands and also with a particular group of nerves called a Plexus.

Each of the Chakra’s or Energy Centres has Governance over particular areas of your body. One of the strongest associations to affect your health and well-being is that formed with your Endocrine system.

The endocrine system is part of the body’s main control mechanism. It comprises of a number of ductless glands that produce the hormones, acting as chemical messengers, that are secreted into the bloodstream from particular organs to stimulate or inhibit physical processes. By adjusting the hormone levels, the endocrine system works to maintain the body in a state of optimum health.

The link between the Chakra’s and the glands emphasis’s the holistic nature of health and demonstrates that you need to maintain a balance in your emotional and mental activities as well as your physical diet and exercise, as they are all deeply interrelated.

The Chakras located on the lower part of our body are our instinctual side, the highest ones our mental side. The Chakras can have various levels of activity. When they are open they are considered operative in a normal fashion.

Ideally, all Chakras would contribute to our being. Our instincts would work together with our feelings and thinking. However, this usually is not the case. Some Chakras are not open enough (being under-active) and to compensate, other chakras are over-active. The ideal state is where the Chakras are balanced.

It makes no sense to try to make over-active Chakras less active, as they are compensating for other Chakras which are under-active. To restore the compensation they would be over-active again in no time.

To stop them from compensating, the Chakras they are compensating for must be opened. Then all Chakras will be in balance.

A variety of health problems may be caused by Chakra Imbalances affecting the associated Endocrine Gland and resulting in illness.

By receiving Energy Healing you can help keep yourself more healthy by taking the Holistic approach. Here are a few brief examples of each energy center and its associated symptoms and issues.

(Base of the spine, energy color Red)
POSSIBLE PHYSICAL AREAS AFFECTED BY AN OUT OF BALANCE CHAKRA: 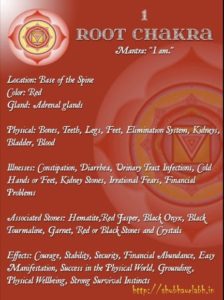 The Root Chakra is associated with the reproductive glands. It is the centre of physical energy, grounding and self-preservation. The Root Chakra governs the back, feet, hips, spine and legs.

The Root Chakra is about being physically there and feeling at home in situations. If it is open, you feel grounded, stable and secure. You don’t unnecessarily distrust people. You feel present in the here and now and connected to your physical body. You feel you have sufficient territory.

If you tend to be fearful or nervous, your Root Chakra is probably under-active. You would easily feel unwelcome. If this Chakra is over-active, you may be very materialistic and greedy. You are probably obsessed with being secure and resist change.

(3″ Below the navel, energy color orange)
POSSIBLE PHYSICAL AREAS AFFECTED BY AN OUT OF BALANCE CHAKRA: 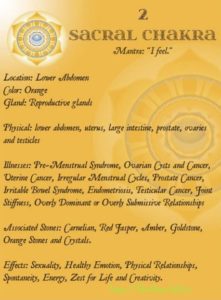 The Sacral Chakra governs the sexual organs, bladder, bowel and lower intestine.
This Chakra is about feeling and sexuality. When it is open, your feelings flow freely and are expressed without you being over emotional.

You are open to intimacy and you can be passionate and lively. You have no problems dealing with your sexuality.

If you tend to be stiff and unemotional or have a poker face, the Sacral Chakra is under-active. You are not very open to people.

If this Chakra is over active, you tend to be emotional all the time. You will feel emotionally attached to people and can be very sexual.

(above the navel, color  yellow)
POSSIBLE PHYSICAL AREAS AFFECTED BY AN OUT OF BALANCE CHAKRA: 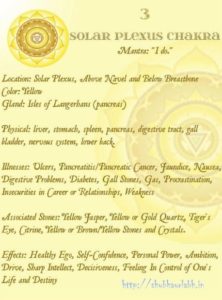 The Navel Chakra governs the stomach, upper intestines, upper back and upper spine.

This Chakra is about asserting yourself in a group. When it is open, you feel in control and you have sufficient self esteem. When this Chakra is under-active you tend to be passive and indecisive.

You are probably timid and don’t get what you want. If this Chakra is over active you are domineering and probably even aggressive. 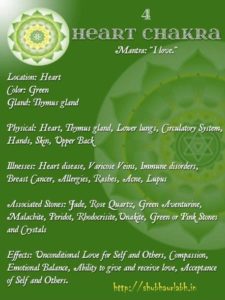 The Heart Chakra governs the heart, lungs, blood and circulation.
As the Heart Chakra is about Love, kindness and affection, when it is open, you are compassionate and friendly, you work at harmonious relationships. 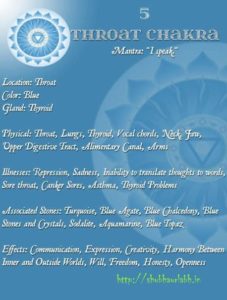 The Throat Chakra is associated with the Respiratory System/Thyroid Gland. It is the center for sound, communication, speech, writing and thought expression.

The Throat Chakra governs the throat, thyroid, mouth, teeth, tongue and jaw.
This Chakra is about self expression and talking. When it is open, you have no problems expressing yourself and you might be doing so in a creative way.

When this Chakra is under-active, you tend to not speak as much and you probably are introverted and shy. Not speaking the truth may block this Chakra.

If this Chakra is over-active, you tend to speak to much, usually to domineer and keep people at a distance. You are a bad listener if this is the case.

(Between both eyes, Dark blue/Indigo color)
POSSIBLE PHYSICAL AREAS AFFECTED BY AN OUT OF BALANCE CHAKRA: 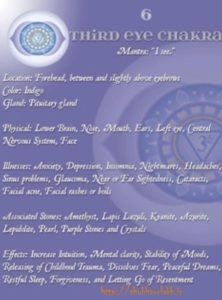 The Third Eye Chakra is associated with the Autonomic Nervous System/Pituitary Gland. It is the center of psychic power, spirit energies, higher intuition and light.

This Chakra is about insight and visualization. When it is open, you have a good intuition. You may tend to fantasies.

If it is under-active you are not very good at thinking for yourself and you may tend to rely on authoritative people. You may be rigid in your thinking, relying on beliefs too much. You might even get confused easily.

If this Chakra is over-active, you may live in a world of fantasy too much. In excessive cases hallucinations are possible. 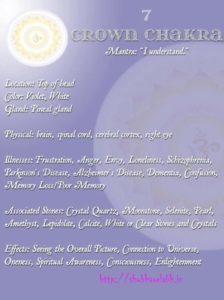 The Crown Chakra is associated with the central nervous system/Pineal gland. It is the center of enlightenment, dynamic thought, truth and oneness.

The Crown Chakra governs the top of the spinal cord, brain stem, pain centre and nerves.

This Chakra is about wisdom and being one with the world. When this Chakra is open, you are unprejudiced and quite aware of the world and yourself.
If it is under-active, you are not very aware spiritually.

You are probably quite rigid in your thinking. If this Chakra is over-active, you are probably intellectualizing things too much. You may be addicted to spirituality and probably ignoring your bodily needs.