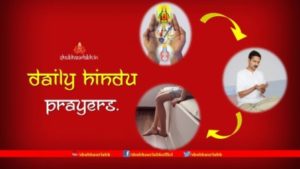 Prayer Before Getting up from Bed:

There are many different stotras and mantras a Hindu is supposed to chant in the morning. Karagra Vasathe Lakshmi is one such stotram a Hindu devotee needs to chant as soon as he wakes up from his bed.

How to chant this mantra – One needs to look at his palms and in the mind think that Goddess Lakshmi, Saraswati and Govinda (Vishnu) is present in his palm. It is believed that the first thing a man sees in the morning determines one’s day.

Daily Hindu Mantra Lyrics to Chant in the Morning

Meaning of the Mantra

Goddess Lakshmi lives in the tip of my palm,
Goddess Saraswathi lives in its middle,
And Govinda (Vishnu) lives at its base,
So I see my palm in the early morning.

Mantra when one wakes up from his bed:

This is the daily prayer addressed to Bhumi Devi as soon as one wakes up from bed and before setting his foot on earth.

Meaning of the Prayer

Salutations to the divine wife of Lord Vishnu,
Who is clothed by oceans,
And is adorned prettily by the mountains,
Pardon me mother, for setting my foot on you.

Cleanliness of body and mind is considered very important by Hindus. As the old-age saying “Cleanliness is next to Godliness”, to decrease the separation of us from God, we need to purify the body as well as mind during bath. When one takes bath in the early morning, he needs to meditate Maha Vishnu in mind and chant this short mantra.

Meaning of the Mantra

Agni or the God of Fire is considered as the one of the greatest Gods by Hindus. Agni, the most important of the Vedic gods, is the mediator between the devotee and the Gods. Agni Deva is the acceptor of sacrifices and all the offerings we made to Fire God (Agni) goes to the deities because Agni Deva acts as a bridge or messages between us and other Gods.

According to the sages, we need to pray this prayer daily when we lit the Lamp