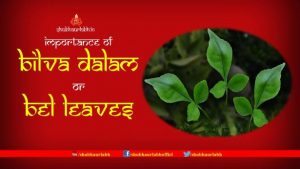 According to vedic scriptures the three leaves of a Bilva Dalam denotes:

Pooja, Stotra and Gyana (It is believed that by offering a single bilva dalam, one can get rid of darkness caused due to agyanam /ignorance).

5) Bel leaves are considered the most sacred offerings in Shiva pooja. A worshipper should offer Trifoliate meaning Three leaves together called Bilva dalam.

6) One should not offer Bilva dalam with two or a single leaf. It is a sin to offer incomplete Bel -Patra.

7) In an Ekabilvam (A single trifoliate bel-patra), Left leaf is Brahma, Right leaf is Vishnu and the middle leaf is Shiva.

Bilva/Bel leaves offered once in Shiva Pooja can  be re-used or re-offered  to God the next day by sprinkling few drops of water on them.  A devotee can offer the same Bilva dalam  for 15 continous days. Even though  bel-leaves become dry, one can still use the dried one’s  in Shiva pooja, such is the grateness of  Bel-Leaf.  Make sure before offering, it has all the three leaves attached to the stem (Trifoliate).

A Garden of Bilva trees (Bilva Vanam)  is equivalent to Kashi Kshetram. It is very auspicious to have a Bilva tree at home.

According to Vastu-Sastra (Science of Architecture or Construction), a house with Bilva Tree in:

South – Protects from troubles caused due to Yama.

It is our vedic tradition to worship Shiva with Tulasi dalam and Lord Venkateswara (Vishnu’s form) with Bilva dalam during Kartheeka masa.  One  should never differentiate between Hari(Vishnu) and Hara(Shiva),  hence the exchange of these Holy  leaves/dalams.

It is also believed that offering prayers to Shree Mahalakshmi with Bel-leaves (particularly on Friday’s and also during Shravana Masa), showers the worshipper with abundant wealth and prosperity.

How to select a good Bilva Patra?

While selecting Bilva leaves make sure the Chakra and the Bajra are not present on them. The Chakra is a white mark made by insects on the Bilva leaves, while the Bajra is the thick portion towards the stalk. The Bilva leaves used in pooja should be of 3 leaflets even if one of the leaves gets detached of three leaves then it is of no use.